Who is Bubble Parties Hollywood? 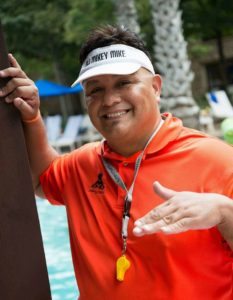 A professional mobile DJ since 1984. DJ Mikey Mike started spinning records during his senior year of High School, After graduating in 1982. He saved a few pennies to invest in a small mobile sound system providing DJ entertainment for small weddings and birthday parties.

DJ Mike brings a wealth of other diverse entertainment experience to the Bubble Party Hollywood program as well. He has been both a mobile disc jockey, theater & film actor, former professional stunt man and MC host.

He was the lead live theatre performer for two seasons at Six Flags Astroworld for The Police Academy Stunt Shows for 2 years. Mike has also done extensive TV, Theater, and Motion Pictures. He has appeared on the USA network series Walker: Texas Ranger for 23 episodes now in cable syndication.

Mike has been entertaining children since 1993 before he actually got in the TV & Film. He did live acting shows for Power Ranger Stunt Shows, Wild Western Theatre shows in the early 1990s.

Mike currently entertains between 500 - 1000 school kids at various events a week combined his DJ skills and theatrical presentations. DJ Mikey Mike was also known for “Disney Pool Parties’ during the early 90’s, and is the resident family Dsc Jockey/MC at the Woodlands Resort & Conference Center during the last 6 years.

The Hollywood Bubble Party Man has occasionally been seen at various events around Hollywood California and is recognizable by his large colorful bubble wands he carries, he creates a path of bubbles which the children follow like the pied piper with looks of delight on their faces!

Client References are furnished upon request. Drop us a line today!